Girl on the Swing 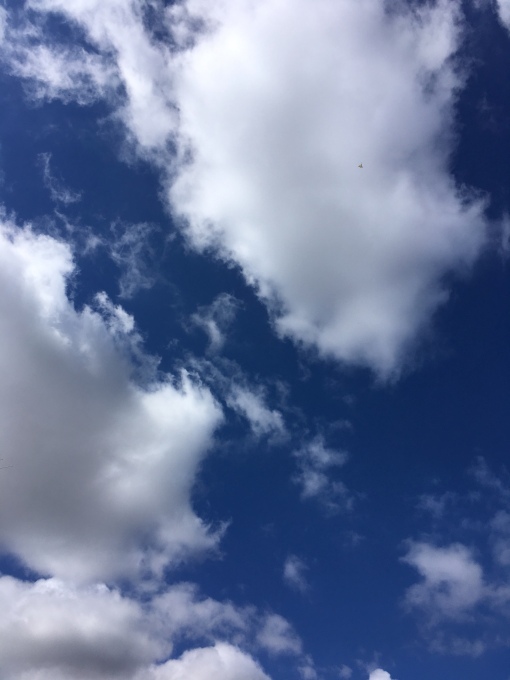 On the day that summer turned to fall, I took my little son to the park. The blue of the sky made the clouds stand out, drawing our attention to the heavens.

There was a college-aged girl on a swing when we arrived. Though I studied her, her eyes never met mine; maybe she never knew. Her gaze was strong and fixed. A hint of a smile crossed her face; the rhythm never broke. I wondered what purpose the swing served for her, what emotions she was stirring as she moved through the air.

Our connection to the past is undeniable. Though our days ahead can seem full of such hope and wonder, looking back to yesterday, I can remember what happened, and it was mostly good. I pushed the hard parts down to make them go away, at least for a time. In the days that are gone, I had no way to know that today’s burdens would slow me down and make my bones weary.

There is so much I don’t understand, so much I can’t say; there are so many words I cannot write, not ever.

The air carries a heavy burden even in its invisibility. I am afraid to walk through it, to break it, for fear that it won’t be contained. Though it is everywhere, I often cannot see it before the darkness takes over, threatening to engulf me in its wrath.

I am consumed; I am spent. Let the day begin.

When I was a small girl, when the bell tolled for summer, the first thing I wanted to do was to swing in my backyard. I believed, and part of me still believes, that if I were to swing high enough, I might be able to wrap all the way around the support bar at the top of the swing set. I have flown so high as to nearly disappear into the clouds, but I have not yet made it around the pole.

When you came to my door, the stories were big, almost daunting, though you were very small. Without words, you told me things that I shouldn’t know. You guided me to places that I didn’t want to go. Still, there was so much hope.

In the beginning, I thought that we could do it together, that the rest didn’t matter. You’ve grown, and we’ve grown, though I often am made to feel smaller than before.

During my week spent at Aix-en-Provence as a twenty-year-old, I walked through the storybook pages of cobblestone streets, lined with cottages…jewel-toned shutters open to the sunny morning…smell of noisette loaves and pain au chocolat wafting by to further decorate my senses. At the top of the road, there was a clearing, defined in part by what remained of a flagstone wall. In the center of that clearing was a wooden board suspended from a frame by the longest ropes that I had ever seen on what was certainly the most magical, enchanting swing. It was there that I felt the deep laughter and joy of my childhood even as I eagerly anticipated crossing the threshold into adulthood.

What if you didn’t have a chance to try the magical swing because it was too hard to find? I am pretty sure we can find it together, if you will trust me enough to take my hand.

When we left the park that afternoon, the college girl was still as we found her, still swinging. Perhaps the swing at this little park, tucked into the edge of the university’s campus, held the same charm for her as mine had all those years before.

You can find your swing; it’s not too late. It’s never too late for the magic.

Inspiration taken from R.E.M.’s “Half a World Away”